Harold S. "Harry" Solomon is the brother of Dick Solomon and Sally Solomon, and the uncle of Tommy Solomon. In a 1998 interview French Stewart said of the character, "The way the character was originally described to me was he would be an idiot on any planet. So he's got to be the biggest idiot in the universe!"

As stated by Harry himself his role in the average American family disguise that the family had adopted was to be "the sponge". Because of this most of Harry's jobs are extremely short-lived but the longest one to date was when he became a bartender. Aside from this, a key story of Harry was when he joined night school and miraculously passed.

Harry has had a string of moderately successful relationships. The longest-staning one was with Vicki but encourages her to have a relationship with the Big Giant Head instead after the birth of their child and another one with a strong, muscular but sweet female cop.

Correctly described as "the biggest idiot in the universe", Harry is recognised for his comical squint, nasal voice, signature fur coat and pratfalls, commonly caused due to cranial trauma. Harry is the only member of the unit who does not play an integrel factor of the common American family disguise they have adapted to, as he does not have a longue-term job or far-reaching prospects, simply stating that his role in the household as being "the sponge" and spends most of his time watching TV or other insignificant tasks, which only he deals with high esteem, given to him by the High Commander largely due to pity (such as testing all fluids in the apartment to test whether they toxic or nontoxic). However, Harry also has a carefree attitude for life, in spite or perhaps because of his stupidity, he does believe that life has been good to him.

Despite his eccentric, alien nature on Earth, Harry has exceeded on various other areas that do not entirely require intellectuality, surpassing that of Dick and Tommy in some specific regards. He was revealed to be a talented artist when enrolled in a class, exceeding the standards of his art teacher and Dick himself. Conversely, he is extremely popular with women, namely Vicki Dubcek, whom he is in a passionate, long-standing relationship and Sasha, another alien who, despite being sent to Earth to control men, began to develop actual feelings for him because of his innocently charming nature. Harry can also be surprisningly perceptive, even with his idiotic nature, he was able to give relevant and actually good advice to Sally and Dick during their low-points (Dick losing Mary to Tommy and Sally being sexually harassed by her boss). Ths end result is that with whatever brain cells he has or uses are too distracted due to his preoccupation and obsession with TV, but with television removed from the equation, he becomes more self-assured, correcting his superiors on their flaws and fobles and proactively enforcing them to take action during their trickier situations, that is until he watches TV again.

Arrival and life on Earth

On first arrival to earth, Harry, unlike the rest of the crew, didn't have a definable purpose to the mission. In the opening credits of Season 1, the Narrator (voiced by James Earl Jones) lists out each members role, when it comes to Harry he says "Well... They had an extra seat!"

Soon after arrival the family tell Harry that he has a transmitter inside his head which is used to communicate with the "home planet". After this revelation Harry assumes the title of Communications Officer. The others agree on this so Harry doesn't feel left out.

When Harry receives a message, which is usually come from either The Big Giant Head or his office and with out prior warning, he is completely taken over. The first signs are always physical - he immediately shudders violently, garbles incoherently, then adopts a stance with bent knees and upraised arms, palms forward. Messages always begin "Incoming message from the Big Giant Head!" or "Transmission incoming from the Big Giant Head!". The voice used for the messages are in a more robotic voice than Harry normally uses. The messages end with Harry saying "Resume normal functions in three ... two ... one ...", or later "transmission ending in three ... two ... one ..." after which Harry will normally sneeze or belch and, as he is unaware of what has happened, will comment "So... What'd I miss?!"

Harry is also considered very handsome and at one point he even loses his signature squint in order to look more refined. During his time on earth Harry got a job as a bartender, and graduated from night school, and even learned how to panhandle. At one point he attempted to have a baby with Vicki but the Big Giant Head did so first.

Despite all of Harry's weirdness and quirkiness, he has had many dates and seems to be a very adept lover. Harry's date have included a well-toned policewoman, a woman at the laundromat, and even Mary Albright's office assistant Nina Campbell. In the episode 'The Thing That Wouldn't Die' Harry made a date with a clerk named 'Sam'. he later see her again in a restaurant as a waitress using her real name 'Samantha', he makes another date with her. Unaware that it is the same person, Harry believes he has dated twins. Also in the Series Finale, it is reveled he has had an on-going affair with Mrs. Dubcek.

In the two-part episode "Dick'll Take Manhattan" Harry is a big shot NBC network Executive in contrast to his most known role as a total idiot. As a network Executive he splits the show "Will and Grace" into two separate shows claiming that Will will have one night and Grace the other. When Dick and Sally decide to return to their universe Harry is resistant at first but soon is told that he has been replaced as network Executive by Mrs. Dubcek then is willing to go home. 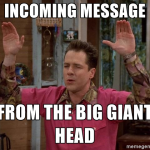